The High Country Nature Park stretches along the Franco-Belgian border in Hainaut Province, not far from Mons (the city chosen to be European Cultural Capital in 2015). It spans part of the divide between the country’s two main watersheds, namely, those of the Escaut/Scheldt (fed by the Haine) and Meuse/Maas (fed by the Sambre for its French stretch) rivers. The park embraces six municipalities (Honnelles, Dour, Quiévrain, Colfontaine, Frameries, and Quévy) and is also of great biological interest, as attested by the fact that 11.5% of its territory (for 1,840 ha) has the Natura 2000 label. 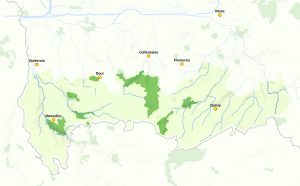 As the territory is more than 70% agricultural, we obviously find a large number of farms that contribute to its economy. This is combined with the fine foods provided by the many skilled artisans who live in the park – chefs and restaurant owners, artisanal chocolate chefs, brewers, bakers, pork butchers, and more – and help reinforce the park area’s image of authenticity.

Besides its wealth of landscapes, plants, and animals, the High Country Nature Park also has points of cultural interest. In this regard, we can mention the well-known poet Emile Verhaeren, who stayed regularly at a farm inn on the edge of Angre Wood from 1899 to 1914, in search of calm and inspiration. These buildings have survived to the present. They now house the Emile Verhaeren Museum Area at Le Caillou, which is owned by the province. In short, a site most worthy of a visit!